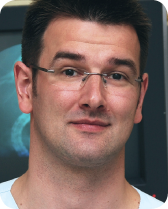 A 57-year-old male was admitted for a lesion in a long-segment Barrett’s oesophagus (C10&M13 according to Prague Classification).

A biopsy taken in another hospital revealed high-grade intraepithelial neoplasia.

On endoscopy we found the lesion (Fig. 1) and were able to detect more lesions than previously described with the help of LCI, which demonstrated purple lesions in a red-to-orange surrounding (Fig. 2). Staining with acetic acid showed early loss of whitening in these areas, confirming initial diagnosis (Fig. 3).

Characterisation with BLI and magnification (Fig. 4) revealed lesions that were highly suspicious of early adenocarcinoma that was later demonstrated by histology [T1b(sm1) N0 M0 V0L0G2] after R0 EMR using the band ligation technique.

The patient is under surveillance and is presently free of disease. This case demonstrates the clinical feasibility of high resolution endoscopy with LCI and BLI for detection and characterisation of mucosal lesions.